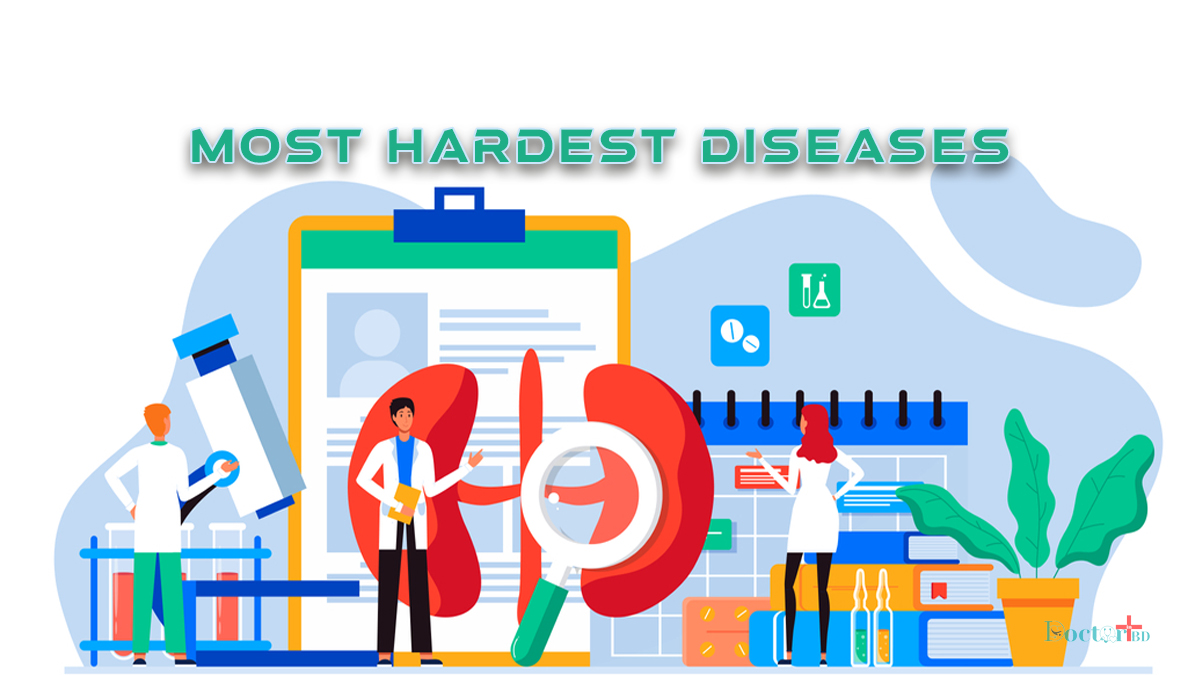 People around us have lots of hardest diseases that are simply difficult to prevent, treat. But if the fact is doctors can’t even figure out your disease type, can’t diagnose, isn’t it terrifying? One of my friends died from fever, was it really a fever? Doctors said that was a fever. But simply that’s not acceptable. After completing my medical college, now I’ve got that his diagnose wasn’t in the right way.

Okay, here I’ll try to introduce you to some hardest diseases that people are being affected by now and then but are so much difficult to diagnose. I’ll try to share mostly my personal experience than medical education. Continue reading.

Hardest Diseases To Diagnose People Have Around Us

Thinking about the hardest diseases that are barely impossible to diagnose, what disease will come to your mind first? Remember, our discussion is not about worse diseases like cancer, coronavirus disease, HIV, or anything like that. Maybe all those diseases are worse but easily diagnosable. We are talking about a disease that is not easy to diagnose, which means not easy to figure out the real disease type and give treatment.

For example, in a TV series, I saw a character who has HUMAN ALLERGIES. Think about it deeply, we all know that fish, shellfish, eggs, milk, and some foods work as common allergy triggers. But what if someone finds out that he is allergic to “Other Human”, isn’t that very frightening?

Appendicitis, also known as Epityphlitis that is one of the hardest diseases. But don’t worry, nowadays, doctors can diagnose this disease. Right lower abdominal pain, nausea, vomiting, and decreased appetite are some common symptoms of Appendicitis but mainly it is inflammation of the appendix. When it will begin to irritate the adjoining abdominal wall, you have to realize that the appendix becomes more swollen and inflamed.

Lyme borreliosis is the other name of Lyme Disease which is an infectious disease. Mainly caused Lyme Disease by the Borrelia bacterium and it is spread by ticks. An expanding red rash is a common sign of infection known as Erythema Migrants. This infection occurs at the site of the tick bite about a week after. Some common signs and symptoms of this disease are loss of the ability to move one or both sides of the face, joint pains, severe headaches with neck stiffness, or heart palpitations, among others.

Fibromyalgia or Fibromyalgia syndrome is a medical condition that included chronic widespread pain and heightened pain response to pressure besides sleep problems and troubles with memory. Depression, anxiety,  posttraumatic stress disorder, and other types of chronic pain are also frequently associated with Fibromyalgia. Nobody knows the main cause of this Fibromyalgia syndrome.

PCOS, Polycystic Ovary Syndrome is known as many other names. These names are Hyperandrogenic anovulation, polycystic ovarian disease, and Stein–Leventhal syndrome that is called the main ovarian disfunction. Polycystic Ovary Syndrome has so many symptoms like as irregular or no menstrual periods, heavy periods, excess body and facial hair, acne, pelvic pain, difficulty getting pregnant, and patches of thick, darker, velvety skin and has no cure as of 2021.

Migraines are mainly a primary headache disorder. These long term recurrent headaches are moderate to severe. Regular exercise may have prophylactic effects on migraines but mainly it made worse by physical activity or sometimes it occurs due to a mixture of environmental and genetic factors. In the whole world, for up to 15% of people affected by migraine, it ranked as the third most prevalent disorder in the world.

Bipolar affective disorder, shortly BPAD is widely called a mental disorder that is also known as Bipolar Disease or manic-depressive psychosis. mainly this disease causes for the environmental and genetic factor. Family history, childhood abuse, long-term stress are the most dangerous risk factors of this disease. When someone suffers from Bipolar Disease, he always thinks of self-harm and sometimes this self-harm turns to suicide. The usual onset of this dangerous disease is 20-25 years old.

What Will You Do When Doctors Can’t Diagnose You?

What to do when you will find out about your Mysterious Symptoms that doctors can’t diagnose? The very first thing you can do is to consider the situation. Remember that all the undiagnosed conditions aren’t uncommon. Around 7,000 rare diseases currently identified that caused people. So don’t be disappointed. Try to make an appointment with a geneticist, most of the undiagnosed diseases caused genetically.

Stay strong mentally, cause mental strength can also make you strong physically. Try to notice the symptoms you have. If you think you have even a very rare undiagnosed disease, still there are solutions. You just need to go to the right place for help and you will know how you will get a diagnosis.

Simply you can get help from UDNI (Undiagnosed Diseases Network International). You can make an appointment for genetic testing. I hope you’ll get help.

Tell us your personal experience about any kind of hardest disease that is too unexpected to diagnose you think and write how much you are likely to agree with the information provided herein in this article.

What Causes Allergy: Symptoms And Causes